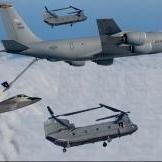 For bros waiting on UPT dates and trying to “prepare”, PM me. I have a passed down 5-page guide from a soon-to-be- fighter pilot that recently graduated UPT.