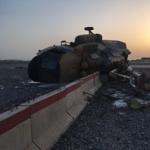 By Bode
February 13, 2021 in General Discussion

BODE, First, thanks for 20 years of service to our nation.  Solid advice being presented so far and as mentioned your first stop should be a sit down with your family.  Being a commander was alwa